Open Banking in Countries Other Than The UK

Open banking is synonymous with the UK and European region. However, many other countries are working on creating their own Open-Banking infrastructure, collaborating with third-party service providers (TPPs), and encouraging data sharing between banks and TPPs.

Open banking outside the UK and European Union (EU) is either market-driven or regulatory-driven.

As the name suggests, in a market-driven approach, third-party providers and banks are allowed to develop their own API platforms. The government supports and encourages partnerships between banks and TPPs, but it does not regulate or interfere with the design or creation of the APIs. Due to limited government responsibility and lack of an industry-wide API strategy, screen scraping remains an important concern.

Under the regulatory-driven open banking approach, the government regulatory authorities play a critical role. APIs need to be as per government specifications. Data sharing is controlled and monitored by the government. 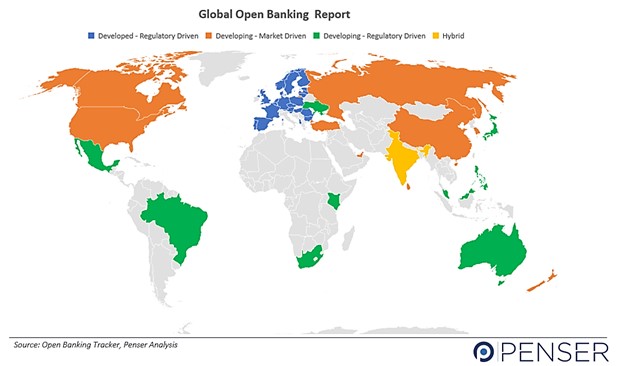 Learn more about What is Open Banking?

Here is an overview of some of the countries that are successfully working on implementing their open-banking infrastructure:

The Open banking system in South Korea was officially launched in December 2019. It is managed and controlled by the Financial Services Commission (FSC). Currently, open banking services have been enabled for saving banks and credit-card providers, but the government intends to cover financial investment institutions and other digital financial service providers. Consumers shall be able to access all banking services, such as withdrawals and transfers using just one smartphone application. In 2020, the South Korean FSC acknowledged that there are approximately 20mn users of its open banking services.

The India Stack’s aim is to promote the inclusion of neobanks, and other financial technology service providers, and increase competition. Simultaneously, it aims to improve the delivery of financial services to the Indian population. India successfully implemented the Unified Payment Interface (UPI) system in 2016. The mobile platform enables users to connect their bank account(s) to registered mobile wallets, which enable digital payments and transactions. According to a report by Credit Suisse, India’s UPI system has been a major driver of accelerated payment digitalization in India. In the last 5 years, the UPI system has grown 10 times, constituting almost 30% of the retail transactions.

In July 2020, Australia launched its first phase of open banking with the introduction of the Consumer Data Right (CDR). Like the UK’s OBIE, under the CDR system, Australian citizens can give consent to regulated third parties to access their financial data from their service bank and other financial service providers, who hold their financial information. Open banking CDR is regulated by the Australian Competition and Consumer Commission (ACCC[sa5] ).  Currently only six companies in Australia have so far managed to receive ACCC’s accreditation. Australia’s open banking ecosystem is expected to take a few more years to be fully functional as UK’s open banking system. Complexity in rules, cost of accreditation, compliance, and educating consumers are the main reasons for this delay.

Given that UK’s open banking promises to be a masterstroke in improving the banking landscape. In 2018, the Government of Canada appointed a committee to review open banking for Canada. The research on Canadian open banking is still in progress. Consumer privacy, security, and possible data breach remain the key concerns of the Canadian government.

Like most countries, the Hong Kong Monetary Authority (HKMA) has been pushing for the adoption of Open Banking. The HKMA aims to offer open data access, account information, and payment options through open banking. Additionally, providing banks and other third-party service providers (TSPs) the liberty to design and develop their own APIs.

Currently, in the third and fourth phases of its Open API framework, the HKMA intends to have its open banking ecosystem kicking off by early 2022.

Japan started working on its open banking ecosystem in 2015. In 2017, the Banking Act was updated twice. Followed by releasing a framework to regulate e-payments and opening the Strategic Development & Management Bureau to devise a new financial services strategy with fintech. Although some leading Japanese banks and financial technology (fintech) firms have started experimenting with APIs to build partnerships and participate in digital ecosystems, many banks are yet to become members of Japan’s open banking ecosystem.

The government of Singapore is committed to an organic approach toward open banking. As it will help Singapore become an international smart digital financial hub. The Monetary Authority of Singapore (MAS) is encouraging financial institutions to use APIs. Banks are equally adopting this change and creating APIs to be a part of the open banking ecosystem.

For example, the Development Bank of Singapore (DBS) offers over 200 APIs enabling payment and loan possibilities with companies like Grab, PropertyGuru, and McDonald’s.

Recently, ANZ NZ has entered into an agreement with UK’s Bud to improve their business loan approval process using its open banking technology.

However, the major problem is data portability and consumer privacy. The  New Privacy Act,  passed in December 2020 does not include any data portability rules. Due to this missing regulation, a company is not legally obligated to transfer customer data to another company if the customer switches its service provider. The Act also does not address the need to destroy the customer’s data when they are no longer a company’s client.

Nonetheless, the NZ government is trying its best to accelerate the open banking ecosystem.

According to World Bank, 50% of Latin America lacks access to proper banking services. Open banking could be a possible bridge. However, open banking is somewhat divided in the Latin American region. While Brazil is making great progress, Mexico is still not clear about its implementation deadlines.

Brazil recently published implementation guidelines for the second phase of its Open Banking initiative. The second phase relates to the sharing of customer data, with their consent. Between participating institutions regulated, authorized, and supervised by the Central Bank. It is compulsory for large and medium-sized Brazilian banks to participate in Brazil’s Open Banking initiative. Brazil also launched -PIX, a payment system. PIX is a creation of the Brazilian Central Bank. It allows consumers and companies to make money transfers 24 hours a day, seven days a week, without debit or credit cards.

In Mexico, the Comisión Nacional Bancaria y de Valores (CNBV) published the first rules of Open Banking in March 2020. However, it is believed that it will still take years before Open Banking becomes a reality.

In the meantime, innovators and fintech firms are counting on alternatives provided by API platforms.

Latin America is expected to be one of the most fertile region for fintech innovation. Experts estimate that in the coming decade fintech companies could occupy up to 30% of Mexican banking market with potential revenue of $24 billion.

Even with the presence of these APIs and TPPs, the U.S. still faces problems. This is mainly due to the lack of a direct regulatory push. Currently, banks in the U.S. are unwilling to share customer data as it may impact their business negatively. However, if there was a regulatory body such as UK’s OBIE, it would accelerate the adoption of open banking in the U.S.

If you are looking forward to considering innovating your business, creating your own open banking APIs, or improve your business banking infrastructure, the team of highly skilled fintech professionals at Penser can assist.

Penser is a specialist fintech and payments consulting firm with experience working for clients in the digital payments, digital banking, and mobile payments sectors. Contact us to find out how we can help your business scale new heights.