CBDC Projects Across the Globe

As mentioned in our earlier article ‘Overview of Central Bank Digital Currency (CBDC)’ many countries are working on their own version of a CBDC. Let’s look into the current status of CBDC projects in various countries across the globe.

Despite a stronger interest in retail CBDCs by central banks, most engagements currently reaching a proof-of-concept/pilot stage are in the wholesale CBDC segment. 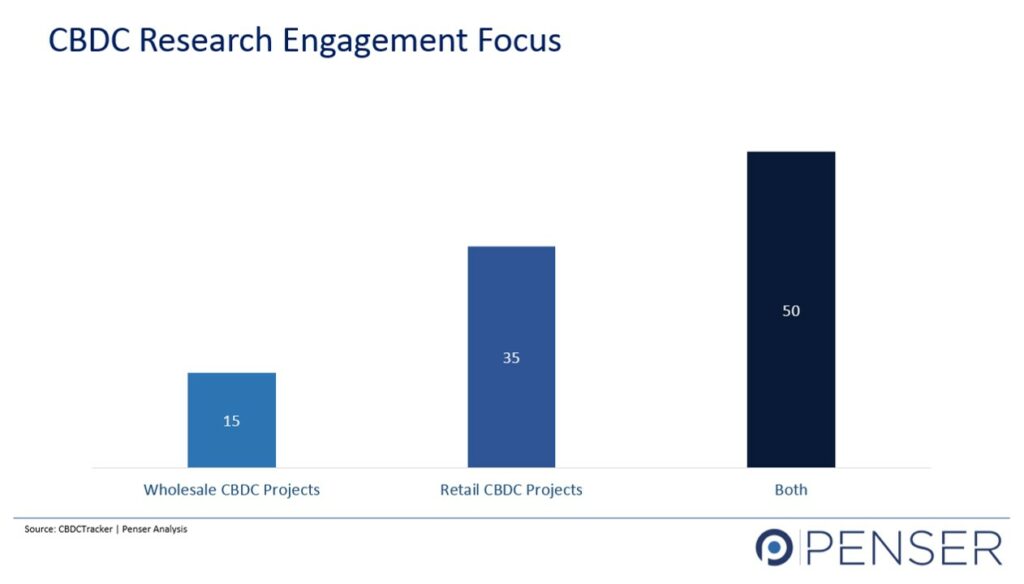 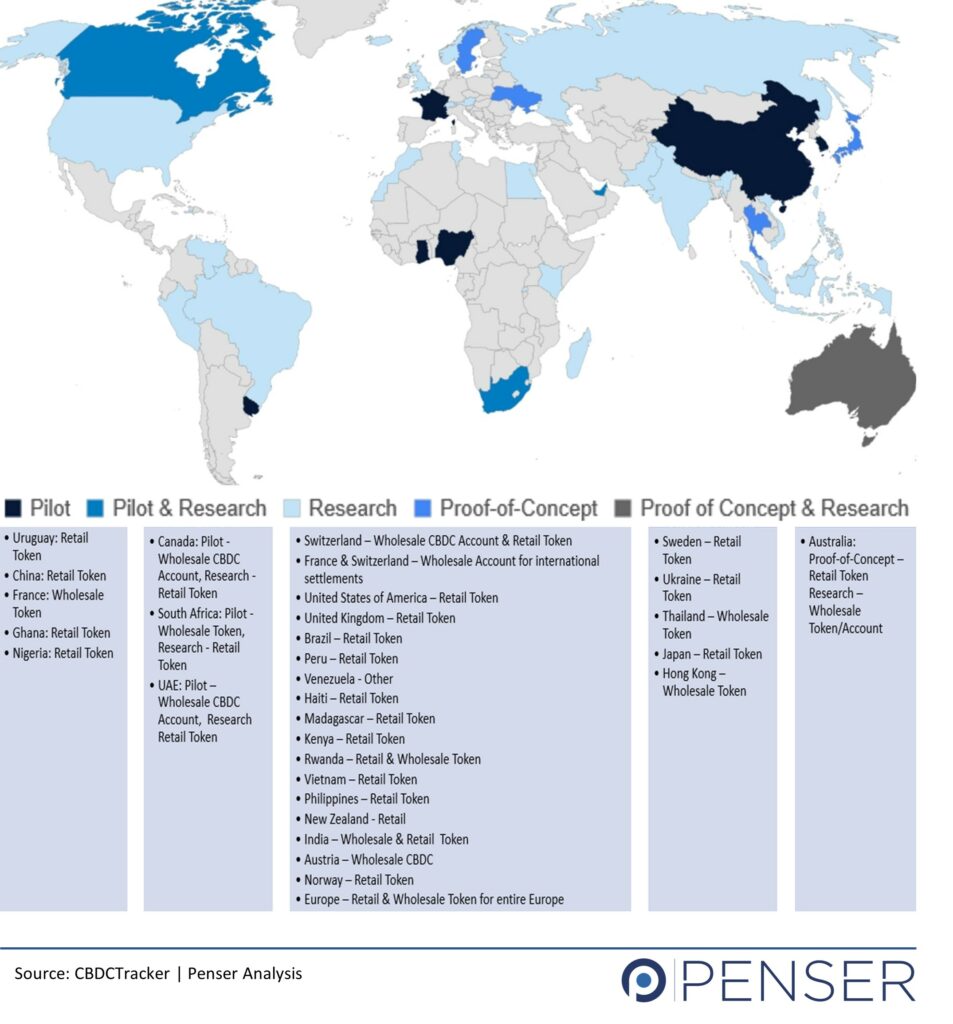 Countries in the CBDCs Pilot and Proof-of-Concept Stage

According to a document issued by the People’s Bank of China (central bank), participants in the digital Yuan (e-CNY) have spent close to 34.5 billion yuan (US$5.3 billion) in trials. The main reason behind the digital Yuan (e-CNY) was the changing transaction habits of the Chinese people. With many of them relying on their smartphones to make digital/mobile payments. Mobile payments accounted for two-thirds of the total transactions in 2019.

The ‘e-CNY’ is a retail token and will be issued only by the People’s Bank of China. Individuals and businesses will be used for paying utility bills, government services, and other expenses, such as dining, transportation, and shopping.

The National Bank of Cambodia (NBC) began exploring digital currencies in June 2018. The Cambodian CBDC project is named ‘Project Bakong’ which was launched in October 2020. Project Bakong is a DLT-based interbank payment system linking 11 domestic commercial banks and payment processors. The NBC has also started experimenting with digital wallets for cross-border transactions with Maybank, a Malaysian-based bank, allowing the possibility of Cambodian citizens working in Malaysia, to transfer funds to Cambodia with much lower costs than before. The Cambodian CBDC will enable interbank, real-time electronic transactions and promote transactions in Cambodian riels, instead of relying on US dollars.

The Bahamas government launched its digital Bahamian Dollar (CBDC), known as ‘Sand Dollar’ last year. With the launch of Sand Dollar, the Central Bank wants to establish a more efficient Bahamian payments system that is more secure compared to paper money. According to John Rolle, the governor of the Bahamas Central Bank, commerce takes time to recover after natural disasters, and digital money proves to be helpful during such situations. CBDCs require a shorter settlement time, and also help enhance financial inclusion.

According to the World Economic Forum, 77% of South Koreans prefer digital payments over cash. The country also accounts for 10% of global cryptocurrency transactions. Therefore, in August 2021, the Bank of Korea (BOK) finally started its pilot program to examine the feasibility of ‘Digital Won’ (Korea’s CBDC). This pilot project is being led by Ground X, which won the Korean CBDC tender. Ground X is a blockchain subsidiary of Kakao, Korea’s largest social network.

Ground X will be working with other Kakao’s subsidiaries, such as Kakao Pay and Kakao Bank on the CBDC simulation. A budget of approximately Won 4.96 billion (US$4.4 million) has been set aside for the Korean CBDC ‘Digital Won’ project.

In this pilot program, the first phase involves the issuance of the Digital Won, which will be done by the Bank of Korea. The distribution, however, will be done through private banks and financial institutions. The total value of the Digital Won transferred to a bank’s digital wallet will be deducted from their account with the Bank of Korea. While, the second phase will involve smart contracts, testing privacy, and security concerns.

Uruguay’s CBDC pilot project started in 2017. The CBDC token is named e-Peso which is a retail token that can be used by business and individual consumers. The central bank will be issuing close to $20 million to 10,000 mobile users with a cap of $30,000 per wallet and $200,000 for registered businesses.

E-peso has been designed to be anonymous but traceable. Thus, preventing double-spending and falsification. During the initial pilot stage, no technical incidents were faced. However, as of now, Banco Central del Uruguay (BCU) has not reported any further investment in the project after the pilot completion. The BCU has destroyed all the e-Pesos created during the pilot and is still to arrive at a decision on issuing e-peso for public usage.

Sweden’s CBDC project started in 2016. Riksbank, Sweden’s central bank intends to replace Swish, a digital payments mobile application with a Central Bank-issued digital currency. In 2019, the Riksbank tested e-wallets, distributed ledger technology, and levels of interoperability across participant banks. Sweden’s CBDC is known as e-krona. The goal of e-krona would be to increase the safety and efficiency of electronic transactions, and it is expected to complete by the end of November 2022.

Canada is working on both a wholesale and a retail CBDC. The wholesale token is called Jasper which is in a pilot stage while the retail token e-dollar is still being researched. The Bank will consider launching a CBDC if certain scenarios materialize or appear as if they are likely to. The Bank of Canada is in no hurry currently has no plans to launch a CBDC. Rather, the Bank will build the capacity to issue a general-purpose, cash-like CBDC should the need to implement one arise. Because it will take several years to build this capacity, the Bank cannot wait until the need is evident before launching preparatory work. Preparing in advance is critical. At the same time, the Bank is preparing for a range of other possible changes to money and payments in Canada as innovation continues.

The aim is to increase efficiency in cross-border payments. The Central Bank of Nigeria (CBN) has announced the formal engagement of the global fintech company, Bitt Inc., as the Technical Partner for its digital currency, named eNaira, which is due to be unveiled later in the year.

Project Khokha was launched to assess the performance, scalability, privacy, resilience, and finality of a DLT solution under conditions as realistic as possible to those in the banking sector.

In March 2019, before the feasibility project Khokha was announced, SARB invited bids from private companies to develop CBDC infrastructure. According to the BIS Quarterly Review, “the scope of this project is specific to the use of a CBDC as electronic legal tender (ELT), similar to the characteristics of, and complementary to, cash.” In planning its potential CBDC, South Africa will likely weigh security heavily, according to South Africa’s Ombudsman for Banking Services, Reana Steyn, who says “internet banking fraud continues to be the most prevalent complaint made by South African banking customers.”

As seen above, very few countries have reached the pilot stage of their CBDC engagement. If successful, along with the advantages of easy and faster transactions, CBDCs could also enable more real-time and cost-effective globalization of payment systems. Cross-border transactions would be easily executed regardless of the time difference. Thus, helping avoid the ‘Herstatt’ risk or cross-currency settlement risk which increases as a cross-currency transaction settlement time increases.

Many countries are working in collaboration to create a wholesale CBDC that could be useful for cross-border payments. The EU Commission is working on a CBDC that can be used for payments across Europe similar to the Euro.

As an expert in fintech consulting and payments consulting, Penser tracks new trends in the industry, which range from Open Banking, Cryptocurrencies, CBDCs, to Blockchain Technology, and a lot more. Contact us at hello@penser.co.uk to learn more about how we can help you transform your business.