Bitcoin – Everything You Need To Know About It 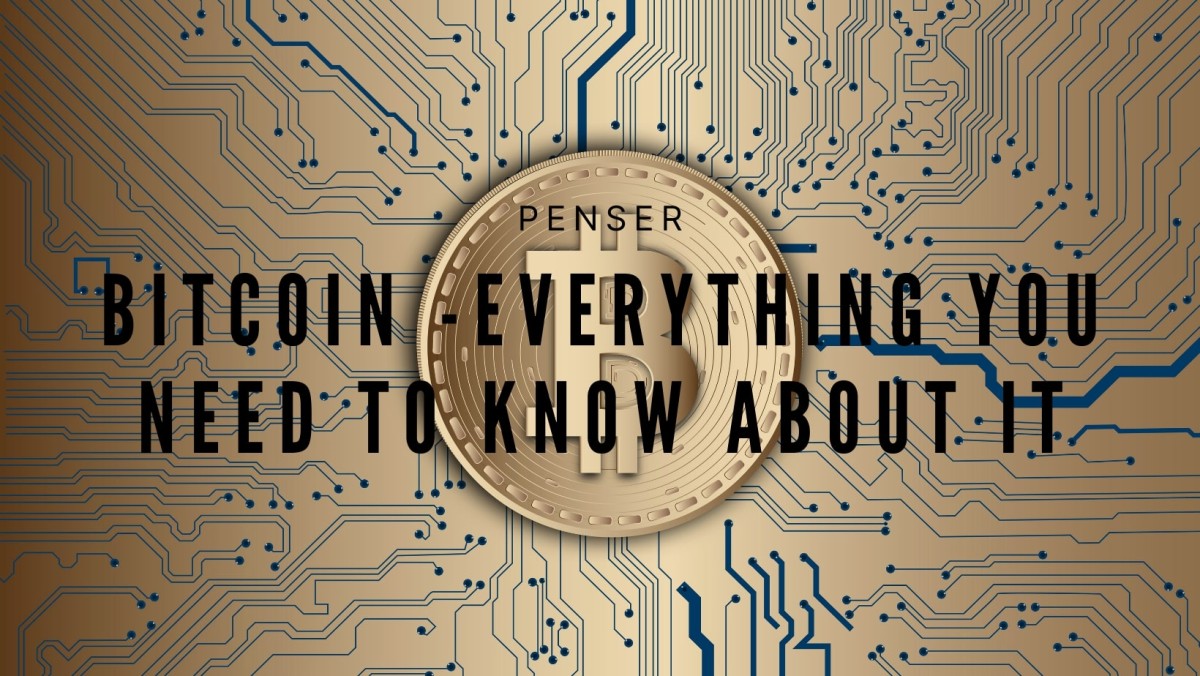 Bitcoin was released as digital cash (cryptocurrency) in 2009 by a person with the alias Satoshi Nakamoto, to replace the existing paper money payment system. However, its status quickly rose to that of a digital asset. Bitcoin’s highly volatile market value works as a hedge against the rising inflation.

Ever since its release, its value has risen from USD$ 1 in 2011 to more than US$ 53,557.98 as of March 26, 2021. Obviously, attracting the curiosity of common people and big corporates alike. One can only expect this interest to continue to grow. Here is an overview of Bitcoin, its uses, and future prospect.

Bitcoin is a non-tangible electronic file with private codes printed inside it. Visually it is represented as a coin with the ‘₿” symbol. ‘Digital wallet’ i.e. crypto wallet is used to store them and other cryptocurrencies. It can be bought and sold, exchanged, and passed on as inheritance. Safety is ensured using Blockchain technology which helps keep track and record of every related transaction. Thus, avoiding duplication of coins, and illegal transactions. 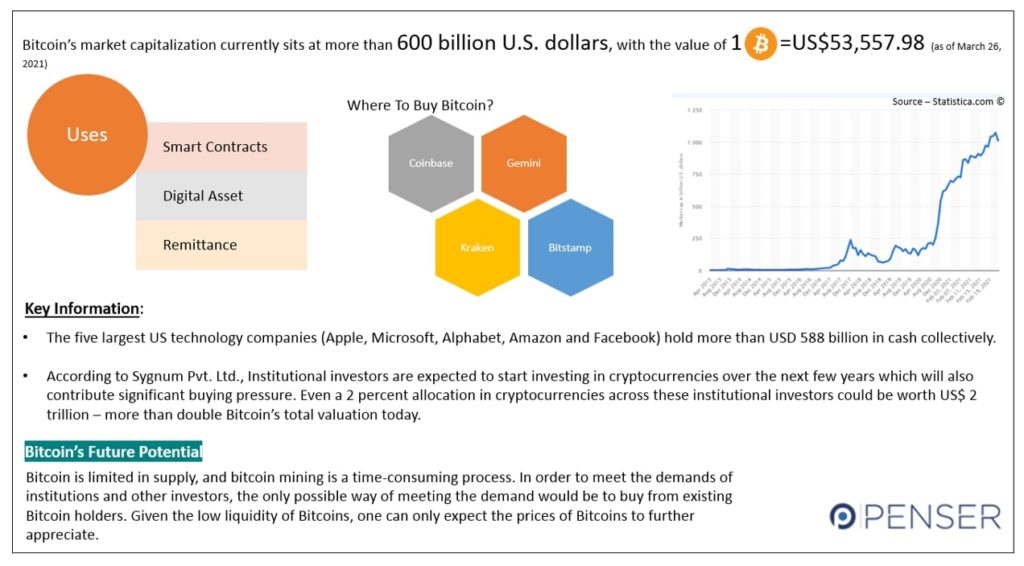 Started off with the idea of functioning as ‘digital cash’ for online payments. However, in the last decade, its use has increased multifold. Some important uses are as:

Note that Bitcoin’s use is diverse and not limited to this list.

How to Get Bitcoin?

Individuals and institutions can buy bitcoin using fiat currency through online platforms. One can sell an NFT or other physical asset and accept payment in the form of cryptocurrency. Lastly, mining them.

Just like coal mining and gold mining, there is Bitcoin mining, but using a computer. Miners basically work as ‘auditors’, tracking online transactions of Bitcoin and preventing ‘double-spending.

Double-spending occurs when a Bitcoin owner spends the same coin twice. This may happen since, unlike paper money, no physical exchange takes place. Miners, therefore, verify the level of transactions, known as “blocks”, and receive bitcoins as rewards. This process of authentication proves the legitimacy of Bitcoin transactions, which helps keep transactions ethical.

Buying Bitcoin is expensive, and mining proved to be an inexpensive way of acquiring it using one’s computer knowledge. However, now it can take years to acquire one Bitcoin, in which case the person may end up with a huge electricity bill.

Ether, launched in 2015, is currently the second-largest digital currency by market cap after Bitcoin.  As of January 2021, ether’s market cap is roughly 19% of Bitcoin’s size.

Litecoin is referred to as the digital version of silver. Charlie Lee, an MIT graduate, and former Google engineer launched it in 2011. Litecoin is based on an open-source global payment network that is not controlled by any central authority. It has a faster block generation rate and hence offers a faster transaction confirmation time.

Tether is one of the first and most popular of a group of so-called ‘stablecoins’ cryptocurrencies. It aims to peg their market value to a currency or other external reference point in order to reduce volatility. Most digital currencies experience frequent periods of dramatic volatility. To avoid this, Tether and other stablecoins attempt to smooth out price fluctuations. Lesser volatility attracts users who are cautious and moderate risk-takers. In January of 2021, Tether was the third-largest cryptocurrency by market cap, with a total market cap of $24.4 billion and a per-token value of $1.00.

Software engineers – Billy Markus and Jackson Palmer invented Dogecoin. With significant celebrity backing by billionaires such as Elon Musk, Snoop Dogg, and Gene Simmons, Dogecoin has managed to boost its market value to over $10 billion (as of February 2021), leading to Dogecoin ranking as the 10th digital coin on CoinMarketCap’s list.

Unlike other cryptos, DAI is a stablecoin that aims to keep its value close to one United States dollar (USD) through an automated system of smart contracts on the Ethereum blockchain.

Concerned about the future of Bitcoin and its ability to scale effectively, Bitcoin miners and developers started Bitcoin Cash in 2017. This was done by forking the Bitcoin blockchain. Forking changes the size limit of blocks added to the blockchain.

According to J.P. Morgan, ‘Bitcoin is likely to outshine gold as millennials become a more important component of the investment market over time and given their preference for “digital gold” over traditional bullion.’

Furthermore, investors are taking a keen interest in Bitcoin along with building their trust towards this digital asset as a potential hedge against inflation, giving it the status of ‘Digital Gold’. Recent purchases by Tesla, Apple, Facebook, and many other institutions as security only go on to show the expanding interest and trust in cryptocurrencies as a future trust-worthy asset class.

Bitcoin has definitely carved a niche for itself in the global financial landscape.

As said – ‘for anything to hold value, it has to be the right amount of rare’. For example, Gold is neither extremely limited that hardly anyone can have it, nor in abundance that anyone can own it. In order to meet this ‘scarcity quality’, it has been capped at 21 million. With 18.58 million Bitcoins already in circulation worldwide, there is room for 2.42 million more. To cover this growing demand of large institutions and traders, exchange/buying from existing holders remains the only way to acquire bitcoin, giving it more solid survival ground rather than looking like a speculative bubble.

Penser is a specialist fintech and payments consulting firm with experience working for clients in the digital payments, card payments, and mobile payments sectors. We offer digital transformation, due diligence, and strategic planning services.

Contact us to find out how we can help boost your business.