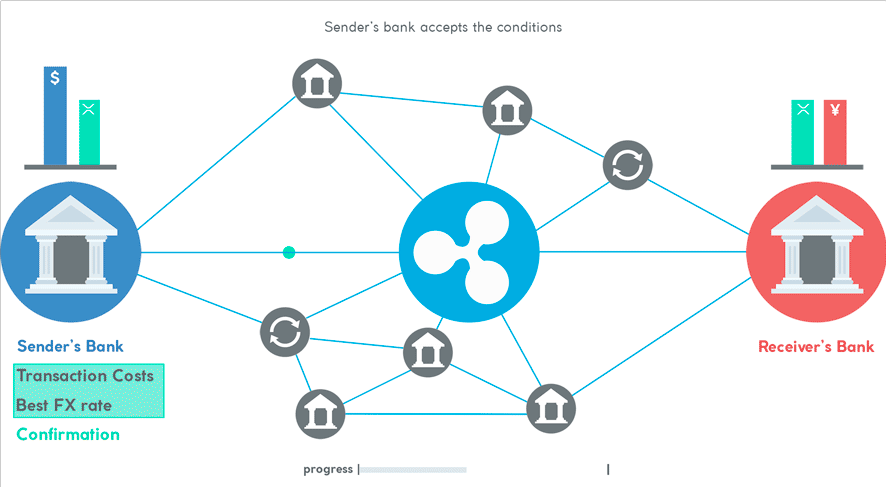 The way people send money from one country to another has not dramatically changed since the 1970s. Despite the advent of the internet and new digital tools, sending money across the world is still complicated: there is no visibility on what occurs during the process, settlements can take multiple days and are usually very costly.

San Francisco-based company Ripple, envisions a world in which value can be transmitted as quickly and cheaply as information. They have a compelling case: $180 trillion worth of cross-border payments are made every year with a combined cost of more than $1.7 trillion a year.

How cross-border payments are made today – SWIFT

As a financial messaging system that runs on a network of thousands of banks across the world, the SWIFT system allows banks to exchange information about financial transactions in a standardized way. Yet, SWIFT is just a financial information communication tool that tells one bank to debit an account and credit another, it doesn’t actually move money.

For banks to conduct cross-border transfers, a relationship between them needs to be established.

However, in order to facilitate transfers to all countries that their clients do business with, banks would need to hold multiple pre-funded nostro accounts across the world. The capital requirements of holding idle money in many countries would be prohibitively expensive, creating the need for correspondent banks. These banks act as intermediaries for smaller and medium sized banks and have partnerships with multiple international banks. When a money transfer is requested, the SWIFT system links banks via correspondent banks and instructs each bank along the way of which transaction to fulfill.

Such a transfer has multiple issues:

Targeting the money transfer pain points, Ripple is using a blockchain-based network to improve the way transfers are done. Ripple is a real-time gross settlement system (RTGS), currency exchange and payment network, built specifically for the direct transfer of assets. The company’s RippleNet is a singular, global network of banks and financial institutions that can communicate between each other in real-time, making cross-border transactions more efficient.

xCurrent is Ripple’s solutions to facilitate real-time settlements and tracking of cross-border settlements. It has four main components:

In the same transfer example seen above, communication between is in real-time, proving the sender with details about the fees and FX rates provided for the transfer. The sender can then accept the transfer which then happens across all ledgers at once. Upon success, the sender receives a confirmation notification.

Such a system provides:

According to Ripple, banks that can minimize settlement delays and lower the operational cost of processing international payments can realize a 33% cost saving: 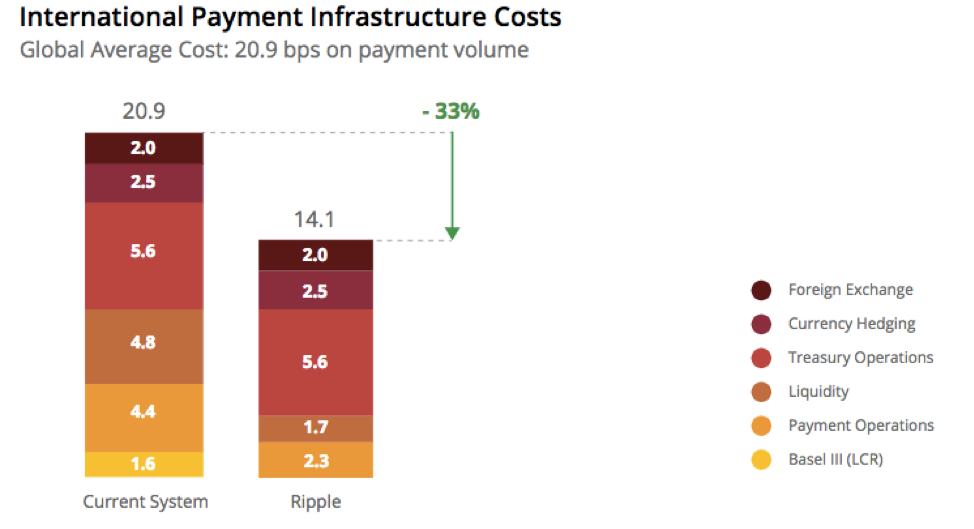 This system still requires steps that are similar to the old model. Senders and receivers still require intermediaries to provide foreign currency accounts and liquidity. The second Ripple product provides a solution to eliminate them.

Digital assets are cryptographically-secured tokens that store value and can be transferred between two parties without the need of a central counterparty. To this day, corresponding banks are needed in the system to provide liquidity in different foreign markets and they require pre-funded accounts to operate. Banks who hold these foreign currency accounts  suffer from the opportunity costs of their tied-up capital.

Ripple introduced XRP as the digital token that can act as a bridge currency to facilitate direct asset transfers between parties. XRP transfers are instant, extremely inexpensive (fractions of a cent) and can be done to any entity on the RippleNet willing to accept the token.

The use of a single asset allows banks to allocate less liquidity to service international money transfers:

Ripple is a viable long-term solution to reducing the frictions in the way today’s cross-border transfers are done. The system can reduce costs by almost 60% and make transfer securely and instantly. 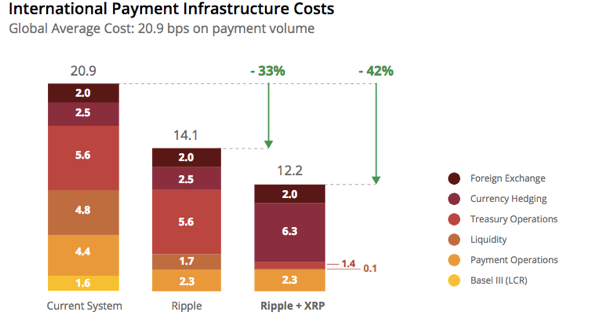 So far, more than 100 financial institutions have joined RippleNet and intend to use xCurrent. Ripple and especially XRP open up countless possibilities for institutions to send assets between each other. Indeed, as long as there is a liquidity provider that is willing to convert XRP for assets and vice versa, financial institutions can use the platform to exchange more than just money but potentially any asset that holds value.

The rise of blockchain-based companies represent a direct challenge to incumbents such as SWIFT, who has launched initiatives to stay ahead in the game.

In response to Ripple, SWIFT launched the Global Payment Innovation Initiative (GPII)  an initiative that improves on the base SWIFT system but includes a set of rules that make banks behaviors more reasonable when it comes to delays and opaque charging. Despite the improvements, the GPII technology still lags behind Ripple in all aspects of money transfers, so much so that SWIFT even considered developing a blockchain alternative themselves. After a failed attempt, the head of Banking at SWIFT recognized: “Blockchain technology is not straightforward to scale and it is not yet appropriate to do so”

To this day, SWIFT still has the advantage of having over 10,000 adherents on its network, but Ripple is catching up quickly: their latest partnership is with Santander, who wishes to offer frictionless payments between the UK, Brazil, Spain and Poland.

Payments is a two-sided network business and while little may have changed in the underlying ‘rails’ for international transfers since the 1970’s we are certainly on the cusp of seeing dramatic changes take place within the next ten years.

Penser is a specialist consulting firm focused on payments and fintech. To learn more about our work visit www.penser.co.uk